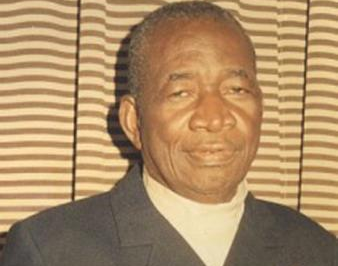 Father Kisolokele Lukelo Daniel Charles is the eldest son of the Special Envoy Simon Kimbangu and mother Muilu Kiawanga Nzitani Marie. He was born in February the 12th 1914. At his seventh years of age, he witnessed a magnificent work of his father which he began in 1921 in Nkamba. This role of witness will also serve as a pretext to the Belgian colonial tyrannical power, when in September the 29th, 1921 was opened In Thysville a trial with numerous false accusations against Father Simon Kimbangu as the Belgian government feared as if he was organizing an uprising against "white". It’s to mention that the seven years old Kisolokele lukelo Charles was also interrogated by the judge De Rossi in Thysville the actual called Mbanza Ngungu to testify if really his father Simon Kimbangu had indeed operated those miracles. At that time the little kisolokele did not have any French knowledge, but an interpreter was there to translate.

De Rossi: Kisolokele come forward to the bare and identify yourself

Kisolokele replied: Yes I ‘am

De Rossi: What can you tell us about your father so-called miracles which he operated?

Kisolokele replied: Those miracles that my father operated were all true because I was there to witness them

De Rossi: Can you at your age understand what miracle means? If yes, can you tell me what kind of miracles your father operated?

De Rossi: Kisolokele are you really sure that at your age you can distinguish a dead person or someone who is asleep?

De Rossi: Weren’t those people that your father resuscitated comedians who were playing game or scenario mounted by them?

Kisolokele replied: Mr. Judge, I ‘am repeating again by saying that I ‘am able to distinguish a dead person and the one who is asleep. My father had really operated those miracles including the healing of those who had any kind of illnesses.
Note: Because of how the seven years old kisolokele was so intransigent on his answers, the judge tried to use a political tactic in order to convince the little boy.

De Rossi: Kisolokele if you testify in front of the judge that your father lied by spreading false rumors on his miracles, I will free your mother, your brothers and yourself.

Kisolokele replied: If i cover the truth by using lies, I know that God will punish me in return. I ‘am firm to assure you that all of those miracles operated by my father were all true.

Due to those answers given by a little kid, the judge the Rossi was so furious and stared to where Simon Kimbangu was standing all chained inside of the courtroom and said Kimbangu even intoxicated his kids. Then the judge gave a kick on the table spreading inks on paperwork that were on it. After that he ordered a black sergeant of the Public Force who was standing by the seven years old Kisolokele, to slap the little kid. The sergeant replied, no I cannot slap a little kid like this.

De Rossi: Do what I ’am ordering you to do if not I will degrade you now

The sergeant replied: You can degrade me its ok because I cannot slap a seven-year-old kid like him.
After that the judge De Rossi suspended the court session and ordered to arrest the sergeant and put him to Jail just for refusing to slap the little kid Kisolokele.

The little child Kisolokele was relegated at Boma by the colonists without having obtained any authorization from his father Kimbangu. It is in Boma where he grew up after being brutally separated from his father, mother and his two brothers. In Ngombe Kinsuka is where his mother Muilu Kiawanga and his two brothers remained in a residence well monitored by the colonists whereas his father Simon Kimbangu was deported in the southeast of the country. Moreover, as know through the kimbanguist history that father Kisolokele was the first one to be relegated. Under his relegation in Boma, he attended his elementary and high school from 1921 to 1930.