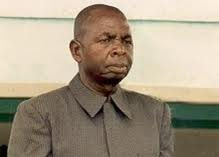 Father Dialungana Kiangani Paul Salomon was born on the 25th of May 1916 in Nkamba. He is the second child of Father Simon Kimbangu and mother Muilu Kiawanga Nzitani Marie. Father Dialungana was commonly known as Papa Mfumu a mbanza (The keeper of the holy city Nkamba). When his father was arrested and sentenced to life imprisonment in 1921, he was only 5 years old. He was too young to understand a terrible tragedy that his family was facing. After father Simon Kimbangu sentence in MBanza ngungu, a decision was taken to far him away from his family and followers. But before that he required to bring his children and wife so that he could spiritually prepare them for the continuation of his work that lasted only six months. After blessing his family, he strictly recommended father Dialungana to be the keeper of Nkamba New Jerusalem all his life. This blessing was done while his eldest son Kisolokele lukelo Charles was already relegated to Boma.

Mother Muilu, her two children Dialungana and Diangienda also spent several days in prison then were released but restricted not to leave Ngombe Kinsuka where they were being severely monitored by the Belgian government.
In Ngombe-Kinsuka, Mother Marie Muilu was forbidden to all gainful activities. The Belgian justice applied this measure to better manage Kimbangu family and avoid any contact with other inhabitants of the village. The young child Dialungana, his brother Diangienda and mother Muilu lived in a narrow-boxed house with a single room. They had many years of lean cow and vegetable eating habit. However, some inhabitants of the village risked their lives, concealing in their costumes, jackets foods to feed them up in the secrecy. Father Dialungana Kiangani attended his school in the protestant establishment of Ngombe-Kinsuka. At the age of 33 he was baptized and became the first Kimbanguist Christian. Few years later father Dialungana was married to mother Kiwasisulua Clementine with whom they had several children. In 1935, father Dialungana who was already separated with his brother Kisolokele LuKelo, was hit by another separation of his brother Diangienda Kuntima who was also relegated. The Belgian authority also wanted to relegate father Dialungana, but when they tried to arrest him, he refused and said you have already arrested me. This time you won’t be able to do anything to me and so it was. Many attempts were made by the colonial government in connection with local people trying to eliminate Father Simon kimbangu family, but they were unsuccessful.

Father Dialungana spent most of his time meditating, praying and writing book advocating the word of the lord and following instructions that were given to his father. He possessed the Keys of Nkamba New Jerusalem welcoming visitors coming from all around the world. Father Dialungana also operated so many miracles just like his father had done in the past and continues to do until now. He was able to bring dead people back to life (resurrections, healings and helped those who were seeking solutions to their material and spiritual problems). In November the 9th 1959 he signed the first decree of the Kimbanguist church leading to its recognition by the Belgian colonial government in December 1959.
Father Dialungana Kiangani made so many evangelization trips which were essentially based in Africa. But his brothers Father Kisolokele and Father Diangienda were travelling all around the world to spread the word of God and instruct people on how to behave in order to create a spiritual connection with God and be saved in the last day.

On September 29th, 1985, father Dialungana Kiangani was hit by a tragic car accident when traveling to Kinshasa the capital city of Congo RDC. He was severely injured and hospitalized in Kinshasa for several days. But even with his pain, his concern was to quickly return to Nkamba New Jerusalem to obey to his
father recommendations given sixty-four year later. Since this tragic accident, his health became very critical but was still able to evangelize as usually. In the Early 1990s, doctors detected Parkinson’s disease that affected his body and speech. After the death of his brother Joseph Diangienda Kuntima the second spiritual leader of the church from 1959 to July 8, 1992, the year of his death, father Dialungana Kiangani Salomon became the spiritual leader of the church. Regardless of his health situation, he performed his daily spiritual tasks normally.

Despite his rank of being the spiritual leader and superhuman highly spiritual, he was denigrated by people because of his physical condition. Many messages were sent by God through songs inspiration revealing” that this is the one who died on the cross and came to live among you for the second time”. But as you are lacking knowledge, you are treating him as illiterate and useless. My children read and analyze the scriptures (Bible) to better be instructed. In fact, Dialungana which is a Kikongo name means, (it’s accomplished).

In April 13, 2000, few days before his death, he openly revealed himself to the kimbanguist That I’ am the lord Jesus Christ that the world has been waiting for. Spread it publicly in the world with no hesitation. It’s to signal that in the Kimbanguism the celebration of Christ birth is not the conventional date of December the 25th. We celebrate the birth of Christ on the 25th of May of each year. In the following chapters we will explain how this was first revealed and why we celebrate differently from others. In conclusion, father Dialungana was and continue to be the man of love and peace. 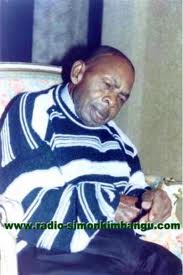